As a mother of a3-year-old daughter and as a fashion photography nerd, I’m very attracted to editorials featuring a mother and a child, in particular to those of the British photographer Miles Aldridge. I’ve always wanted to retrace his vision on this unique bond through many of his editorials, but in the meantime let’s focus on A Family Portrait, published on the August 2011 issue of Vogue Italia.

The editorial is a perfect summary of Aldridge’s style: many iconographic details, recurring in his works, can be found here, along with the central theme, anticipated by the title of the editorial. Aldridge is one of my favourite photographers: his unmistakable use of colours, the unnaturalness and cinematographic style of his pictures – most of all – the controlled tension pervading each shot, make his pictures original and unpredictable. His editorials go beyond the main goal of fashion photoshoots, because they always have a deeper meaning: they tell a story which we – viewers – can interpret as we prefer. Another reason why I like his style so much is its moral ambivalence: the ironic and provocative take on serious themes apparently asks for a moral judgement, but this is not its goal.

The opening picture of the editorial is quite conformist: mother (Bianca Balti) and daughter are walking along a Parisian boulevard, the only eccentric touch is given by the red balloon held by the mother.  It’s interesting to see how they are dressed: I’m referring in particular to the girl, because the outfit that she sports here sets her style. Bon ton-meets-college girl: the light blue coat with black buttons, the black hat, skirt and matching Mary-Janes (worn with white socks) is an ensemble which reminds of the uniform of schoolgirls attending a rich private school.

The aforementioned Aldridge’s unique use of bright and saturated colours and his passion for indoor shots can be found in the picture above, where mother and daughter share a sweet moment. As it always happen in Aldridge’s microcosm, there’s no space for warmth and spontaneous passions: everything is covered in an artificial and affected aura. In this case, the girl is brushing her mother’s hair, but her face is not visible, hidden behind the red brush (a disquieting element, or a detail which indicates who is the most mysterious between the two). The scene is dominated by girly colours, pink in particular (the mother’s lace dress and her coral jewelry, cushions and the satin – but plasticky-looking – bedspread). The feminine outfit of the mother contrast with the severe clothes of the daughter, whose only girly detail is the flat bow on her hair.

The composition of this shot is very interesting: the face of the daughter is again partly hidden, while the mother is leaning on the wall, her face reflected by an oval mirror. Most of the photoshoot is set in a luxury hotel, another recurring theme in Aldridge’s work: the almost aquatic quality of the light reminds me of Gleaming Evenings, published on Vogue Italia in 2002. The girl is holding a “Do Not Disturb” sign, and again she’s the one who’s taking action, while her mother resembles a beautiful and perfectly coiffed doll.

Aldridge loves portraying models in unusual positions: in this case, Balti is lying on a glass coffee table, wearing a beautiful chiffon printed dress and holding a cigarette. The daughter – her hand holds a lighter – is ready to fulfill her mother’s wishes. Here the colour combination is interesting, too – green, acid yellow and red (in two different shades) beautifully contrast.

I like this picture very much, where many contrasts are perfectly balanced. The relation of mother and daughter can have different interpretations: the daughter acts like a maid (she’s helping her mother to get dressed), but at the same time she may be playing with a life-size doll (see her mother’s graphic position). Childish possessions are scattered in the room (some books under the glass table, a dinosaur on it, for example), while an artificial touch (the plastic covering the pink sofa) gives the setting a weird mood – a plastic cover in a luxury hotel?

A suggestive light blue light pervades this picture, too. Here the idea of the mother as a doll is clearly emphasized: the daughter (whose hands are visible) applies some lipstick on her mother’s pouty mouth. The blank stare in the latter’s eyes and the perfectly coiffed hair are other elements which reinforce this idea; it is as if the girl is playing with a giant Barbie Styling Head.

Aldridge’s visual mastery lies in details, which can give pictures a completely different dimension. Take the shot above, for example: mother and daughter are sitting on the plastic-covered sofa – one is holding the receiver, the other is ready to dial a phone number (see a telephone book next to her). At a glance there’s nothing disquieting in it, but details – the glass and the pill blister packs on the floor – tell a different story: has she tried to commit suicide or what? In this case, a moral judgement is tempting but other details catch our attention, the dress of the girl, for example. Her clothes are always severe and simple, contrasting with her mother’s over-embellished or definitely stylish outfits; in this case, her chiffon dress with side bow on the collar echoes the blouse with side bow her mother is wearing in the previous picture. 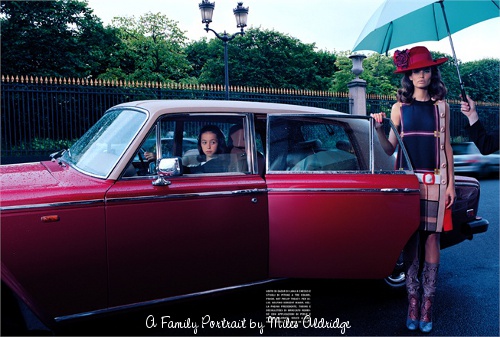 This picture is obviously a provocation: the girl can’t drive (she’s a minor!), but she’s sitting behind the wheel, while her mother is ready to sit on the backseat, while a man (a valet?) is shielding her from the rain with an umbrella. The pictures seen so far don’t have a definite time connotation, but in this case the mother is wearing a Sixties-inspired outfit: her dress reminds me of the famous Mondrian sheath dress Yves Saint Laurent designed in 1965, and boots and hat underline the mood.

Extreme fierceness in the mother’s attitude: she’s wearing a sexy chiffon dress with thigh-high slits, a black fur stole and a wide-brimmed hat. It is as if she is walking on a catwalk… while she’s actually holding her daughter’s hand, many colourful balloons at their feet. The airy attitude of the mother can be found in the girl, too, who’s wearing a cute pork pie hat and  a black dress.

This is one of the most meaningful pictures of the editorial: besides the psychedelic quality of the colours in the background, I think the pose of the protagonists is interesting. It reminds me of a scene from Bellissima (1951) by Luchino Visconti, one of the masterpieces of Italian Neorealism: the protagonist (a fantastic Anna Magnani) is holding and kissing her daughter, the symbol of all her illusions to escape poverty. In this case, the mother is hugging her daughter, but the girl’s hand on her mother’s face is an eloquent gesture, meaning: “Here is my treasure.”

In this picture, the mother is sitting on her bed. She’s so lost in her thoughts that she doesn’t seem to pay attention to her daughter, who’s painting her toenails. Possessions of mother (her high-heel sandal on the bed, the red cocktail and bottle on the bedside table) and daughter (the hula hoops) can be found in the room, but they’re part of distant world. In this case, it’s clear the daughter is playing with her doll-like mother. Another trademark of the photographer: fried eggs (you may remember a fried egg was the “protagonist” of a still life editorial – Red Marks – published on Vogue Italia in 2003).

This is definitely my favourite picture. I love it because the girl is reading a comic book (I’ve got a passion for comics) and for the first time she’s behaving like a girl of her age, surprised by something she’s just read. A curiosity: she’s reading Super Picsou Géant (the title of this n. 146 issue is Un Été Beau Et Musclé), a Disney magazine published in France from 1977 to 1983, at first as supplement of Picsou magazine, later as an independent publication. Her mother is lying next to her, asleep: the comic book by her side shows us she’s tried to read a comic book but in the meantime has fallen asleep. This is the only shot where the protagonists give in to their impulses.

The second and last outdoor shot presents mother and daughter sitting by a fountain in a park. The scene is dominated by the colour green, which characterizes clothes, chairs and the water in the fountain. It’s more and more evident that the roles are inverted: the mother is holding an ice-cream cone (it’s not clear if she’s just holding it, waiting for her daughter to eat it, or if she is eating it), while the girl is holding a mirror and applying some lipstick. Is the role game coming to its peak or is there something else in store? 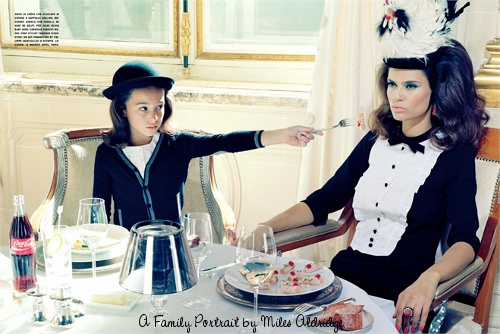 Yes, there is! Here the daughter is really behaving like a mother, trying to spoon-feed her own mother, who’s sitting at a table with a vacant stare in her eyes, while her pouty mouth shows she might have thrown a tantrum. An inconsistent funny touch is given by the chicken-shaped hat worn by the mother (a Moschino piece), but nothing in the scene is actually funny. I can feel a cold atmosphere, lifeless like the food on the plates or out-of-place like the Coke bottle [1] on the table.

I don’t think a fashion photographer should only focus on denouncing the vices of our society – he/she’s not a news reporter, after all – but at the same time pretending his/her work is detached from reality would be short-sighted and hypocritical. While still being a fashion photographer, Aldridge keeps on working on his personal journey through motherhood and its flaws with a unique and original attitude, thus showing fashion photography is not a distant bubble but a means which can mirror reality.

[1] I’m referring to a recent Coca Cola commercial, which has been harshly criticized for showing this good but unhealthy soft drink as the family drink par excellence.

My Articles on The Harlow